Rhinoplasty to repair a crooked nose

Recent or old trauma to the nose can cause a fractured nose, a non-displaced nasal fracture, or a dislocation of the upper lateral cartilage off of the pre-existing nasal bones. In addition, a deviated septum can result from a fracture of the nasal septum, which can then block airflow. It’s very important to evaluate the septum for airflow issues after trauma to the nose.

There are many issues in the nose that can create a crooked nose. An asymmetric nose can be created from crooked nasal bones, asymmetric (concave and convex) upper lateral cartilages in the mid-portion of the nose, and crooked nasal tip cartilages. In addition, the caudal septum can be crooked which creates asymmetrical nostrils. Each one of these issues is dealt with differently during a closed rhinoplasty approach to straighten the nose.

William Portuese, M.D. prefers to perform these procedures with a closed rhinoplasty approach under general anesthesia as an outpatient surgical procedure. To straighten crooked nasal bones requires medial and lateral osteotomies placed in them and manually reducing the fracture and twisted nasal bones to make them straight, symmetrical and parallel. A cast is applied across the bridge of the nose and is left in place for one week. Visible bruising and swelling also takes place for approximately 10 days. The majority of the bruising and swelling is due to the osteotomy placement in the nasal bones.

When looking at the base view of the nose, the nostrils can also be asymmetrical due to a variety of issues. If the nostrils themselves are asymmetrical, an alar-plasty on one side can try to match the wider nostril to make it look like the narrower one. Many times, a crooked columella is due to a caudal septal deviation, which can be trimmed back or straightened. Dr. Portuese is the medical director of the The Seattle Facial Plastic Surgery Center

Rhinoplasty to repair a crooked nose was last modified: May 17th, 2021 by admin

Rhinoplasty for reduction of the bulbous tip

The bulbous tip is created from wide and divergent lower lateral cartilages that compose the nasal tip anatomy. The bulbous tip is usually not created from the width of the actual cartilages themselves, but the angulation at which they’re oriented in the nasal soft tissue envelope over the nose. To narrow a bulbous tip, this can be accomplished with either a closed rhinoplasty, or an open rhinoplasty depending upon the surgeon’s preference.

Reduction of the bulbous tip

After the cartilage grafts and sutures have been placed, the cartilages are then reinserted back into their normal anatomical position, and the incisions closed with dissolvable catgut sutures. It takes several months to start to see what the new nasal tip looks like due to the swelling that occurs in the area of the nasal tip, which is prolonged. Full healing after a rhinoplasty procedure is one year. When patients have thick skin in the tip of the nose, this is a significant impediment to seeing a very refined result over the nasal tip cartilages. Patients who have thick skin in the nasal tip are poor candidates for open or closed rhinoplasty. Many patients also require taping of the nose in the first 6 months after the procedure, and some patients require cortisone shots to help prevent buildup of fluid and scar tissue in the supratip area of the nose. Follow-up with your operative surgeon is of utmost importance, and is just as important as the surgery itself.

Rhinoplasty for reduction of the bulbous tip was last modified: May 12th, 2021 by admin

Closed rhinoplasty to build up the nasal bridge

A Closed rhinoplasty procedure can accomplish building up the nasal bridge. In many cases patients are born with a low bridge profile and would simply like to build up the height of the bridge for better facial aesthetics and balance. Other patients, have had an over-resection of the dorsal hump, and are left with a residual ski-slope deformity. In addition, some patients have received a traumatic injury to the nose and are left with a saddle nose deformity. When performing a revision rhinoplasty, it’s important to know how much cartilage as left on the inside of the nose for potential grafting purposes. A cartilage graft is the preferential way to build up patients own bridge line with their own natural tissues. If there is a cartilage-depleted nose, ear cartilage can be considered. In rare cases, rib cartilage may be needed. Once the nasal cartilage or ear cartilages have been harvested for potential grafting, they are then fashioned in the proper shape and inserted through a small incision along the bridge line of the nose. Most of the time the grafts are placed in a precise pocket, but they also can be sewn in place if needed. Alternatively, some patients require a significant amount of augmentation and they have no cartilage left on the inside of the nose and do not wish to have a rib cartilage taken out. For these patients, a Flowers Silastic nasal dorsal implant is used. These are also inserted in a small anatomical pocket along the bridge line. These implants are composed of Silastic, and can be custom carved when necessary. These implants are not the typical L- strut used in Asia. The L- strut implants can cause a lot of problems and many times have to be removed. In addition to building up the bridge of the nose, many patients require osteotomies placed in the nasal bones to narrow a pre-existing wide bridge line in addition to adding height to the bridge. This also helps to give added height to the bridge as well. Both medial and lateral osteotomies of the nasal bones are required to narrow them. It is also important to evaluate the status of the nasal tip to make sure it is in balance with the new and higher bridge line. Some patients require a reduction in the size of the tip with a conservative cartilage removal, while other patients require augmentation of the tip to of balance with the bridge. Tip cartilage grafting techniques are sometimes required to make sure the tip balances with the entire new bridge line. Dr. Portuese performs nasal surgery at The Seattle Facial Plastic Surgery Center, a state-of-the-art licensed and certified outpatient surgery center in Seattle Washington. 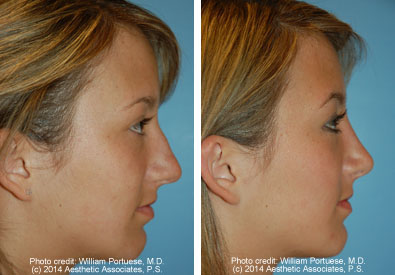 View more rhinoplasty before and after photos
Closed rhinoplasty to build up the nasal bridge was last modified: January 31st, 2019 by admin

Some patients are born with an unnaturally narrow nose and would like to have it cosmetically widened. Other patients are born with an “hourglass deformity” which means they have pinched or very narrowed upper lateral cartilages in the mid-portion of the nose. Typically these patients have wide nasal bones, a dorsal hump, and a wide tip. The inverted upper lateral cartilages appear concave and relatively speaking, can make the tip look more bulbous and the bridge look wider. To widen a narrow nose requires osteotomies placed in the nasal bones, which include both medial and lateral osteotomies. The medial osteotomies are placed at the junction between the upper lateral cartilage and the lower portion of the nasal bones. Instead of narrowing the nasal bones, they’re actually cantilevered out more widely, also known as reverse osteotomies. Cartilaginous spreader grafts are then inserted in the space where the medial osteotomies were placed to hold the nasal bones open in their new wider position. The cartilaginous spreader grafts can be harvested from the dorsal hump that’s been removed or from inside the nose from nasal septal cartilage.

The spreader grafts are also placed in a sub-perichondrial and sub- periosteal pocket. It’s also important to make sure the tip of the nose balances with the new bridge line. In some patients the tip may need to be narrowed, and other patients, the tip needs to be widened. A conservative cartilage removal is required to narrow the tip, while cartilage-grafting techniques are required to widen it. Rhinoplasty is a very difficult endeavor, so is very important to choose a rhinoplasty specialist based on extensive experience performing osteotomies, spreader grafts, and advanced bone and cartilage work to create a natural appearance. Dr. Portuese performs all of his nasal surgery procedures at the Seattle Rhinoplasty Center, which is a state-of-the-art Medicare certified outpatient surgery center located in Seattle Washington 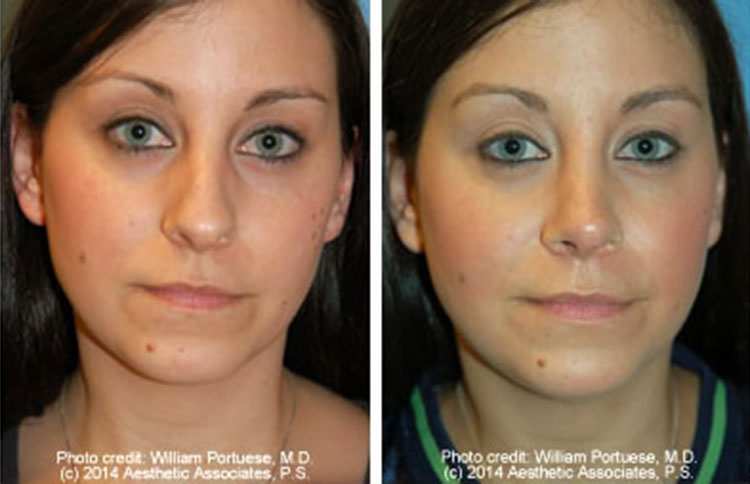 There are many issues in the nose that can create an asymmetrical appearance to the nose. A nose job procedure, also known as a rhinoplasty can accomplish making the nose look more symmetrical. There are a variety of techniques available to accomplish making the nose look much more symmetrical than it already is. As a surgeon, it is very important to evaluate what is causing the structural asymmetries underneath the skin soft tissue envelope. A closed or open rhinoplasty procedure can address mild, moderate, or significant asymmetries. With a closed rhinoplasty approach, all incisions are placed on the inside of the nose and dissolvable sutures fall out in about a week. If the nasal bones themselves are asymmetric and crooked, medial and lateral osteotomies of them are required with an osteotome to set them straight and parallel. If the upper lateral cartilages are convex or concave, they need to be adjusted as well. A convex upper lateral cartilage can be shaved down. A concave upper lateral cartilage will make the nose looked twisted in the mid-portion of the nose, and this is corrected with a spreader graft placement. The nasal tip cartilages are often asymmetric and they need to be adjusted as well. The mild asymmetry is adjusted with shaving down a thick lower lateral cartilage of the nasal tip, while a cartilage graft is placed on the thinner nasal tip cartilage on the opposite side. When significant asymmetry exists in the nasal tip cartilages, a full delivery with suture techniques is required to make the lower lateral cartilages of the tip look symmetrical. Asymmetrical nostrils can also be adjusted with an alar-plasty, and a columellar-plasty. A deviated caudal septum can cause the columella to be twisted as well. Dr. William A. Portuese is the medical director and founder of the Seattle Rhinoplasty Center, a Medicare certified, Washington state licensed, outpatient surgery center located in Seattle Washington. 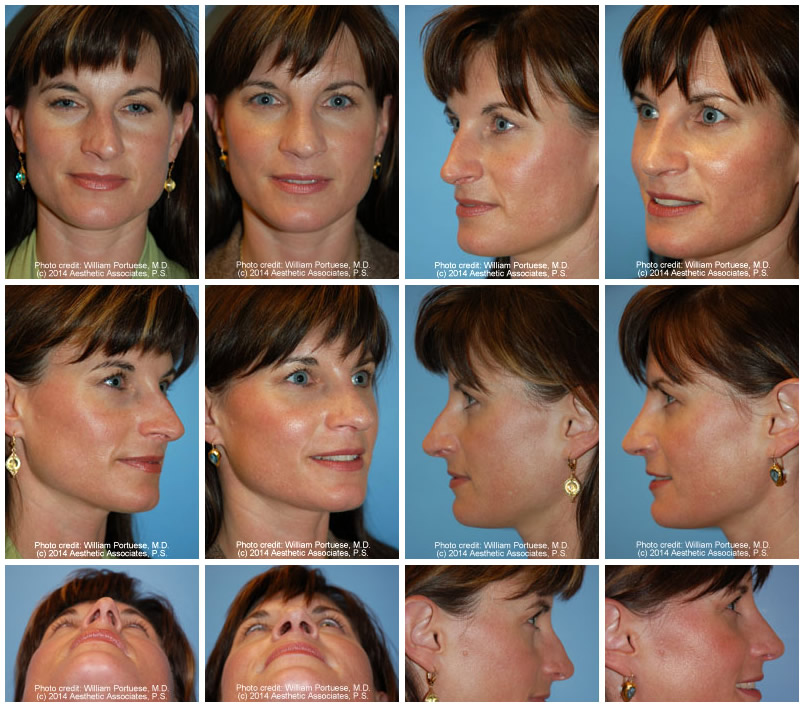 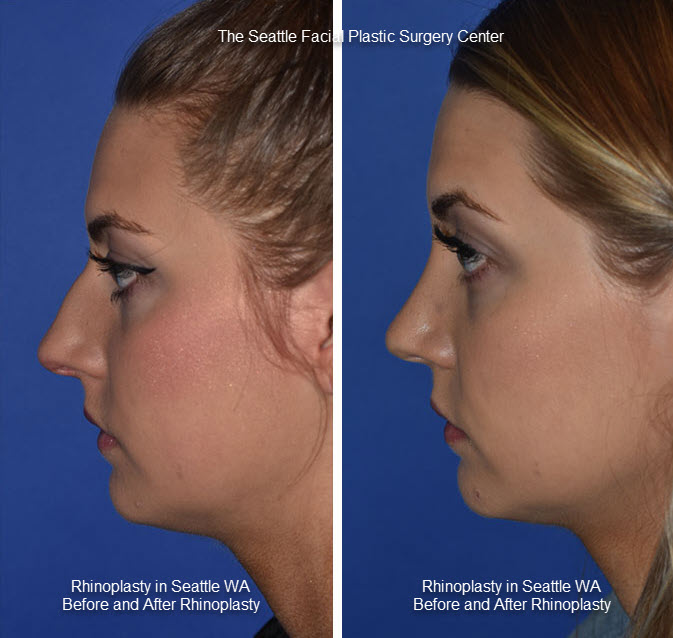 For more information about having a facelift in Seattle visit https://www.seattlefacial.com