Patient’s Complete Guide To A Facelift and Neck Lift

When the facial aging process begins to take place and the face is sometimes out of harmony with the eyelids or forehead, some patients become self-conscious. And when patients state that they look older than they truly feel, a facelift or a neck lift is performed. The face / neck lift is a very popular procedure done frequently in the United States. The facelift is done for cosmetic reasons, and it is a procedure that is done on the face and neck to rejuvenate the face. This procedure tightens up lax facial skin, neck skin and muscles, jowls, and addresses neck fat as well. It also tightens the muscles in the face, the posterior portion of the neck and the front portion of the neck. Excess skin is removed around the ears and fat is removed underneath the neck.

There are three components that are addressed with a facelift. The first one is the fat in the neck, which is removed with both direct and indirect liposuction and fat sculpting. The second component is muscle, which is tightened underneath the neck to redefine the jaw line, tighten behind the jaw line to accentuate the posterior portion of the jaw line, and it is tightened up at the cheek area to lift the jowls. The third component is excess skin. Once the muscles have been tightened and the fat has been removed, there is usually excess skin that has to be trimmed in a very conservative fashion.

There are different types of facelifts that are performed. There is a traditional facelift, which addresses a full face and neck lift. This addresses facial skin laxity, the jowls and all of the neck fat and laxity of the muscles in the neck. There is also a mini lift, which is done for simple facial laxity to lift the jowls only and does not address the neck area. This is typically done on younger patients less than 50 years old who just have jowling but have an adequate jaw neck line. There is also a neck lift alone, which can usually be done on patients who are less than 50 years old, to address only neck fat and redefine the jaw line, but it does nothing for the jowls and facial laxity 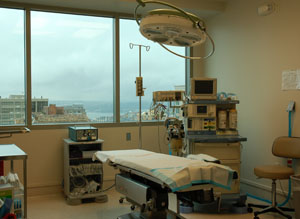 The facelift operation is performed on both men and women starting in the late 40s and into their 50s and late 60s when the face and neck start to sag and a fullness in the neck and the jowls start to descend over the jaw line. The incisions for a facelift start at the hairline at the sideburn and weave behind the tragal portion of the front of the ear and then placed behind the ear crease and up into the hairline. Patients are usually able to put their hair up off their shoulders within a few months after the surgery, and there is no shift in the hairlines.

Facelift and Necklift Side Effects

Complications of a facelift or neck lift