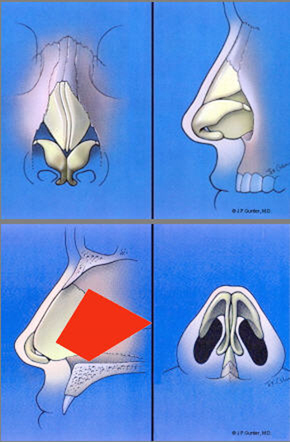 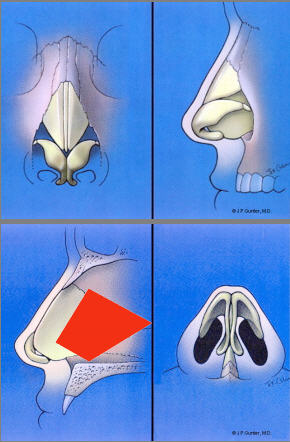 The area in red represents the septum. When the septum is crooked or deviated, it must be straightened to permit functional breathing. This also represents the area of cartilage and bone that is the internal portion of the nose, which can be used for dorsal augmentation to build up the bridge or sidewalls of the nose used in structural cartilage grafting for a rhinoplasty. 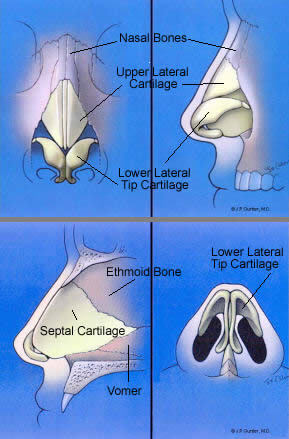 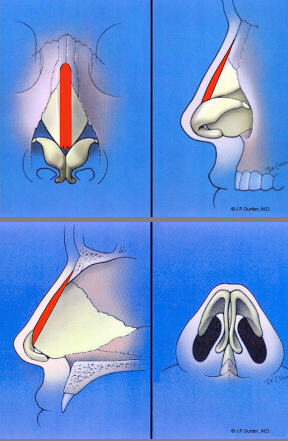 The area shaded in red shows the area of the bridge where a bump would be present. It is removed to further refine the dorsal aesthetic line or also known as a hump reduction in the nose. 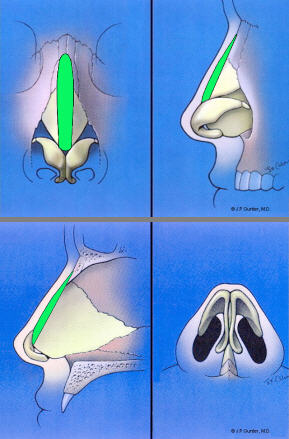 The green area represents an area of cartilage augmentation to build up the bridge when the bridge itself is too low or been previously resected or is ski-sloped and needs to be built back up. Typically the cartilage is harvested from the internal portion of the nasal septum or ear cartilage is also used. Occasionally patients require a synthetic implant to achieve the desired results. 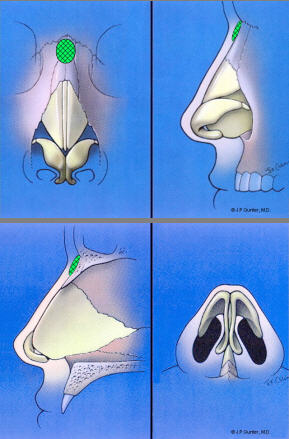 The area in green represents a small cartilage graft that is placed at the top portion of the nasal dorsum called the radix. When the bridge of the nose has an area of depression, a graft is used to build up and lengthen the nasal bridge. Additionally this procedure augments the shallow takeoff root of the nose from the forehead. 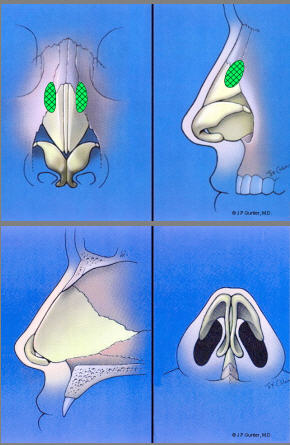 The green areas represent cartilage grafts that are placed over the nasal bone or upper lateral cartilage area to bolster the strength and augment the sidewalls of the nose during a rhinoplasty. 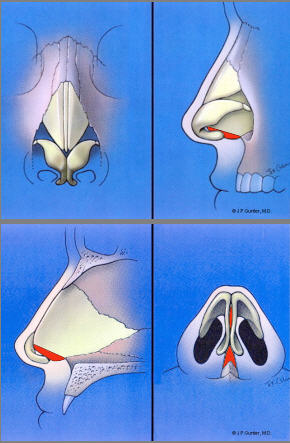 The area in red shows the resection of cartilage that is done where there is a deviated septum and where the portion of the base of the nose is warped and blocking the airway. It is also done to trim off excess columellar show when the columella is hanging down too far below the nostril rim. This can be both cartilage and skin, it can be trimmed, and is frequently done during a rhinoplasty procedure. 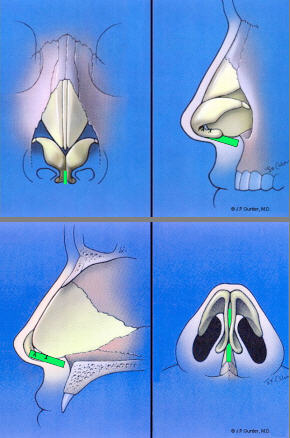 On occasion when there is loss of tip projection or support in the tip, a cartilaginous columellar strut is fashioned from septal cartilage and positioned underneath the tip to give more projection and strength to the nasal tip. 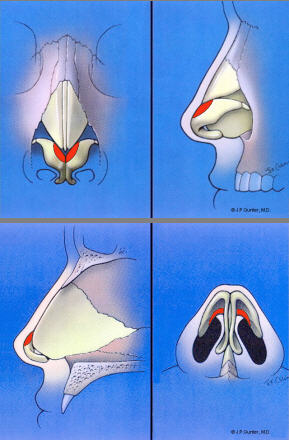 The area in red shows the most common area of cartilage that is trimmed and removed to feminize, refine, and reshape a bulbous tip. This is a very common procedure during the tip component surgery of a rhinoplasty. 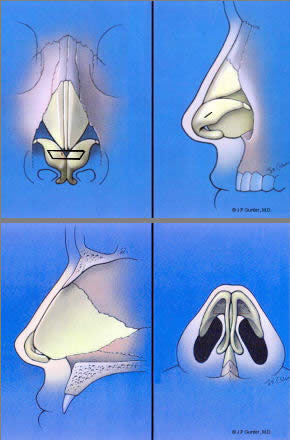 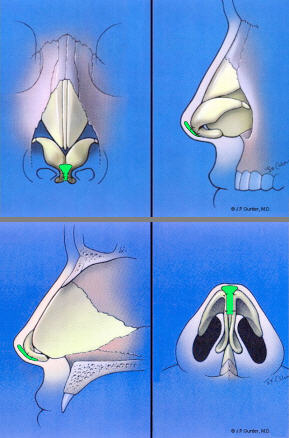 The area in green shows small cartilage grafts placed in the tip to create further tip projection. This also helps with tip defining points and is sometimes used to give a better appearance to the tip. 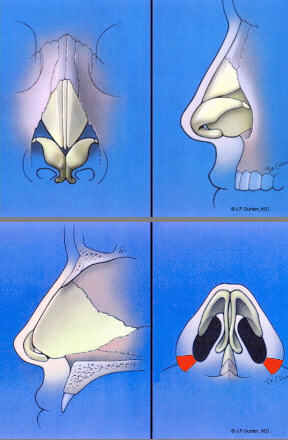 The area in red shows the area of the skin of the nostrils that is removed and resected for wide, flaring nostrils. Sutures are placed in the natural crease and typically disappear after the incisions are well healed. 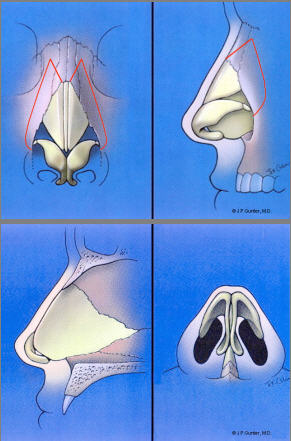 The red lines represent the areas where the nasal bones are narrowed during rhinoplasty. This is when the nose is re-broken and reset narrower after it has been fractured or reduced in size to narrow the width of a wide nasal bridge. 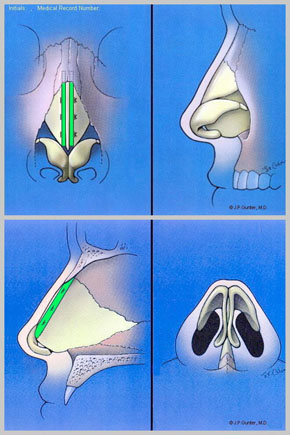 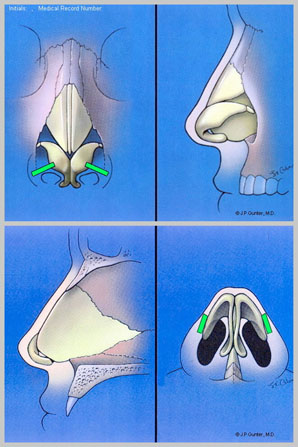 Alar rim grafts are used to strengthen the alar rim, help with valve collapse and correct contour irregularities of the tip. Composed of septal cartilage, the grafts are sculpted into a convex shape thereby increasing rigidity and convexity to prevent nostril collapse during inspiration. Through a closed (endonasal) approach, these grafts are placed on one side or both sides of the alar rim on the inside of the vestibule to counteract a pinched nostril appearance. Carved to be convex in shape, these grafts give convexity to the alar rim and prevent nostril collapse or inward migration upon deep inspiration. 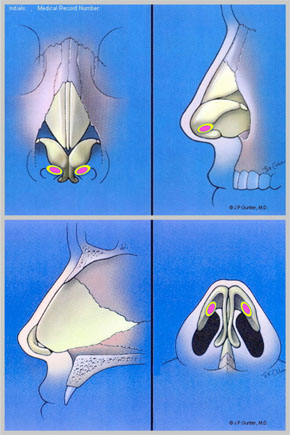 Composite grafts are used to correct alar flare or a retracted alar rim and notching. These grafts are unique because they are composed of both skin and cartilage harvested from the ear and their primary purpose is to pull down a retracted alar rim, especially when notching is present. They are placed just on the inside of the nose at the alar rim, which expands the internal nasal vestibule creating a downward expansion of the alar rim and a better alar-columellar relationship. 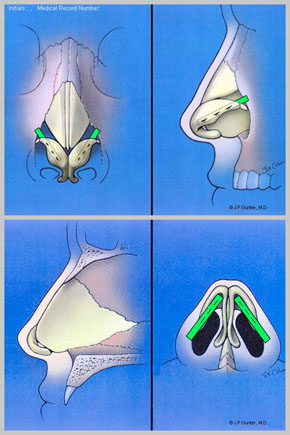 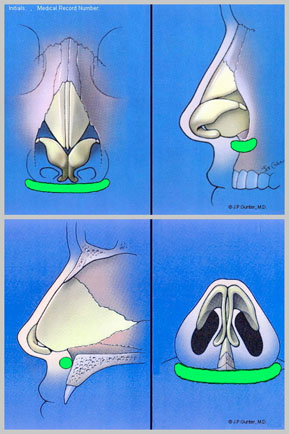 A premaxillary graft is used to improve the projection of the entire base of the nose. This graft is made of either septal or ear cartilage and augments the base of the nose beneath the nasal tip. The graft is placed above the periosteum at the piriform aperture just above the upper incisor tooth roots. 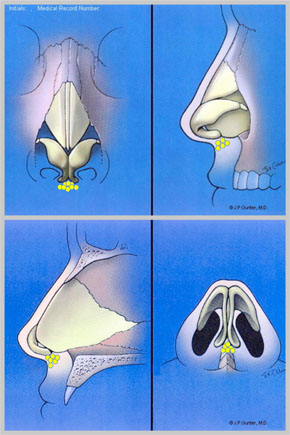 Columellar plumping grafts are used when the nasolabial angle is quite low and retracted. Either septal or ear cartilage is used to fashion these grafts. They are inserted into the lip junction at the columellar base to augment and build up that area. 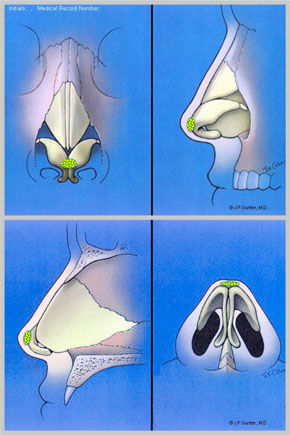 Cap grafts are used when more projection or softening of the nasal tip is desired. It is a particularly useful if one is trying to decrease the bifidity or cleft of the nasal tip. The cap graft will create more projection to a flat nasal tip and minimize incongruences of the tip cartilages. The graft is composed of nasal cartilage and is placed over the dome area of the lower lateral cartilages.
back to top
Nose Issues was last modified: April 13th, 2022 by admin