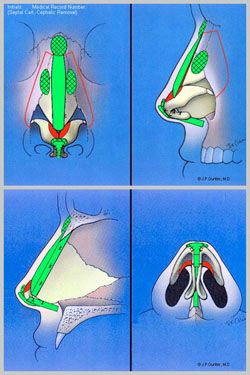 Rhinoplasty on the tip of the nose is performed to sculpt a new tip to match with the rest of the nose. The tip of the nose is made of cartilage and it is overlying the top of the cartilaginous septum. Reshaping it usually involves reducing it in size, making it less bulbous and more refined and harmonious with the rest of the face. Occasionally, sculpting and refining its shape, augmenting its size or increasing the length is done, but the most common is to reduce the size, thickness and bulbosity of the tip. Dr. Portuese may remove some of the cartilaginous bulbosity of the tip so as to bring it more into alignment with the rest of the nose. A wide, thick, bulbous tip is made narrower by placing stitches in the tip cartilages to hold them together. Occasionally, cartilaginous grafts such as a spreader graft, a tip graft, or a shield graft are placed on the tip to improve the look and projection of the tip. Most patients requiring a rhinoplasty are going to need a full rhinoplasty, but on rare occasions a tip plasty, which operates on only the tip portion of the nose, is performed. The remainder of the nose has to be in excellent balance when just the tip is addressed surgically. 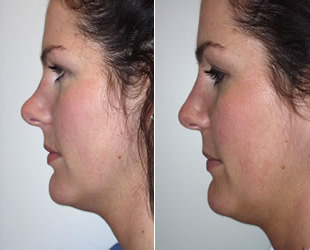 In many instances the nose or tip needs to be built up for aesthetic or structural reasons. If the preoperative condition of the nose is lacking cartilage either in the tip, sidewalls, or bridge of the nose, a cartilage graft is sometimes necessary. The graft is placed inside the nose for structural reasons and cosmetic purposes. When the cartilage in the nose or the tip needs to be augmented or built up, Dr. Portuese will use cartilage most likely from the patient’s septum. When cartilage is taken from the septum, Dr. Portuese removes a portion of the nonstructural cartilage from the septum that does not affect the support mechanisms of the tip or bridge of the nose. If cartilage is taken from the ear, Dr. Portuese will make a small incision hidden behind the ear. If the amount that is needed to augment the nose is greater than can be accomplished through use of the patient’s own cartilage, then an alloplastic synthetic implant will be used. These implants are often used in an Asian augmentation rhinoplasty. 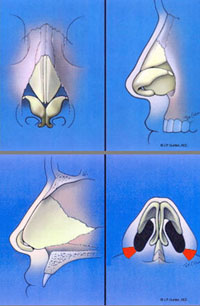 Wide nostrils can make the nose look bottom heavy. During the Rhinoplasty procedure Dr. Portuese can narrow the shape and width of the nostrils at the sill to further balance the nasal tip. If the nostrils are too wide or too large, Dr. Portuese removes a wedge of tissue where the nostrils join the cheeks. This is known as a Weir excision of tissue. This excision is hidden in the natural crease of the nose at the alar junction and is easily camouflaged. Stitches for these are usually dissolvable. Once Dr. William Portuese has finished the rhinoplasty procedure where he has resculpted the cartilage and bone of the nose, then the Weir excisions are done. All incisions are placed on the internal portion of the nose and are dissolvable. Dissolvable stitches resolve on their own and do not require any removal.