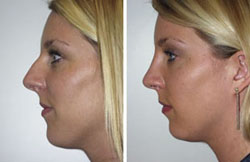 Initially, there will be a slight improvement in the shape of the nose, but 70-80% of the swelling usually subsides by one month after the surgery. Once the nose surgery is over, they breathe better out of their nose after the first week. It takes approximately one year for the other 20-30% of the swelling to subside and to see the final results. 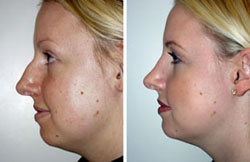 The nose still has 20 – 30% edema and is still fragile and swollen. This could necessitate additional surgery. Dr. Portuese asks that patients avoid blowing their nose for the first week after the surgery, but sniffing is acceptable. If patients have to sneeze, it is best to sneeze with an open mouth and to not muffle the sneeze. With respect to cleaning the nose, most patients are able to gently clean the exterior of the nose with normal soap and water and the interior portion of the nose can be cleaned with saline. If there is crust formation, only Vaseline may be used on the inside for prevention of build-up of crusts along the incision lines. These activities aggravate swelling and raise blood pressure which can also cause a nose bleed. Within the first week after the surgery, most patients are able to put glasses on right over the top of the cast and once the cast is removed, the glasses can be taped up to the forehead in the postoperative phase for the first one month after the surgery.